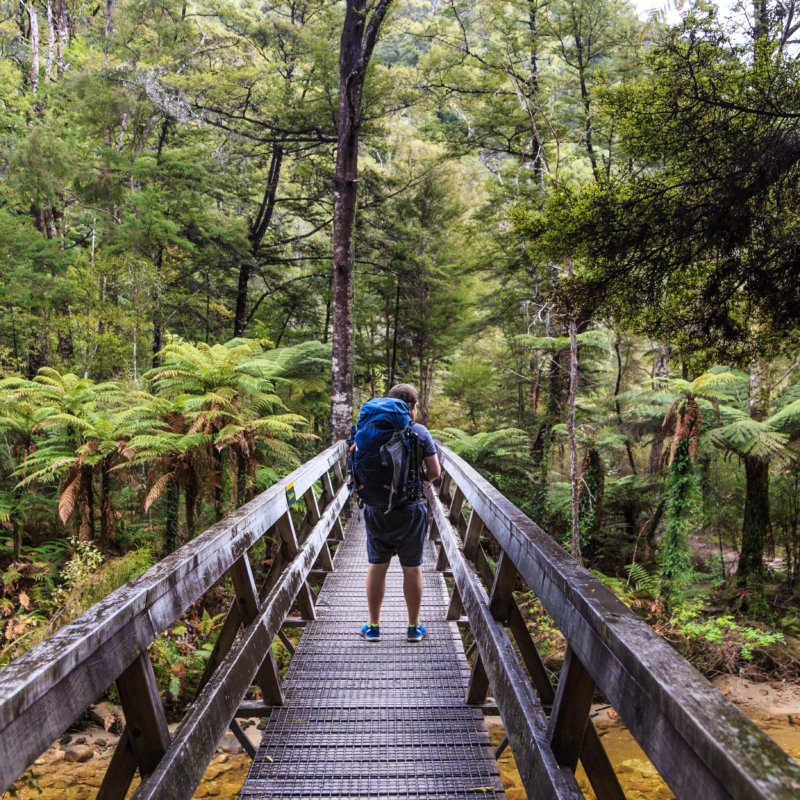 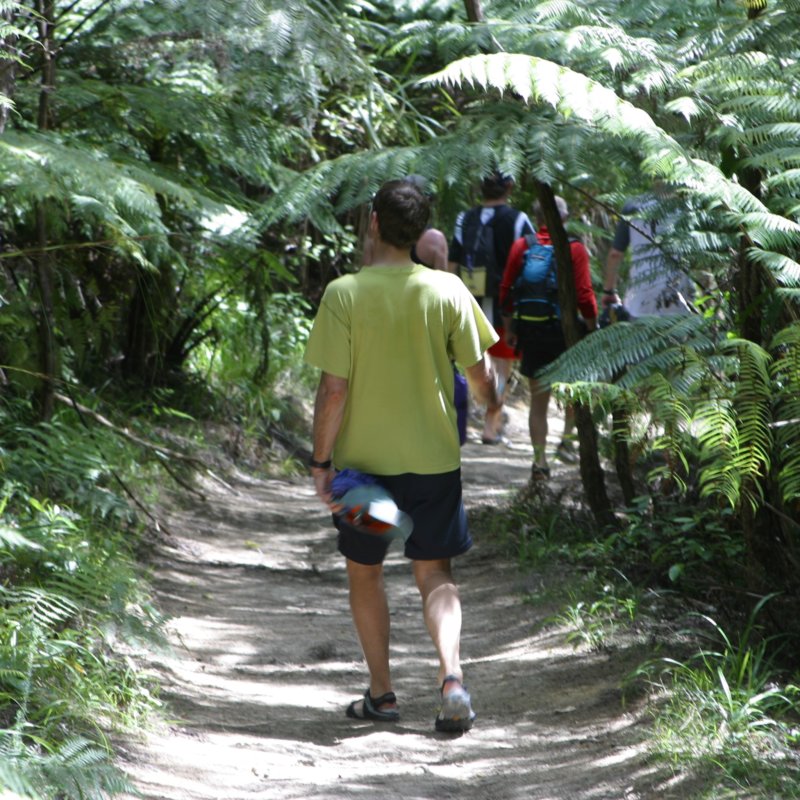 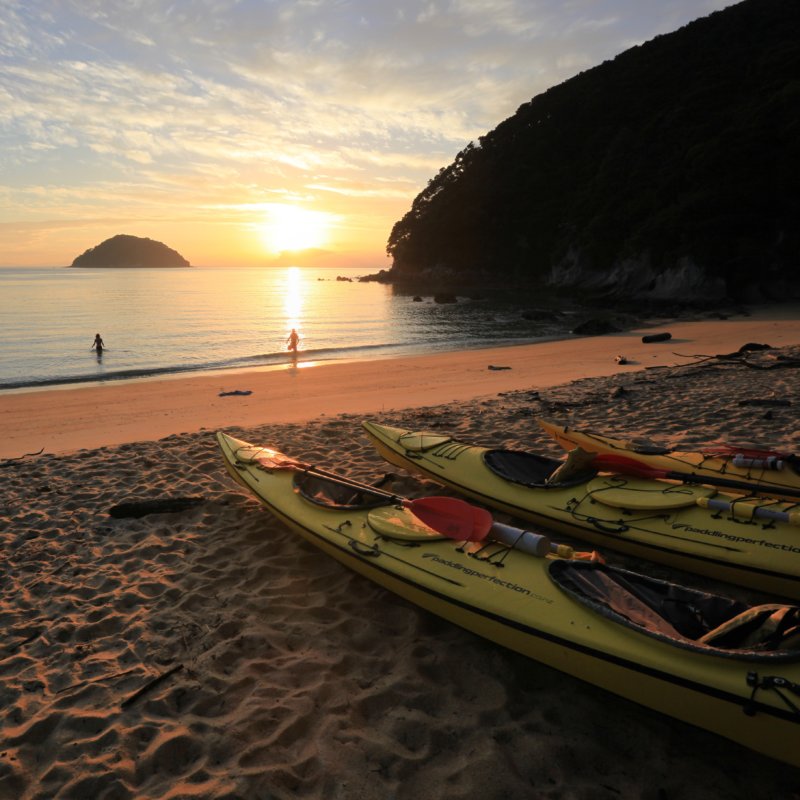 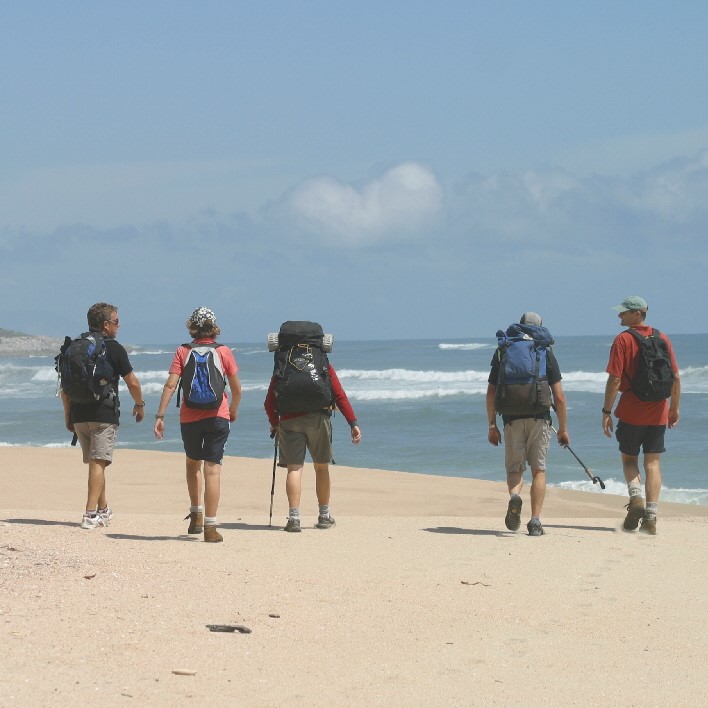 Three days of private guided hiking through some of the best parts of Nelson’s two Great Walks, the Abel Tasman track and the Heaphy track. Overnights on either our 46ft luxury catamaran or Awaroa Ecolodge in Abel Tasman National Park make the tour unforgettable.

Combining the landscapes of New Zealand’s only coastal National Park, with its golden sandy beaches and clear turquoise water, with the remote and rugged mountains and wild coastline of Kahurangi, offers three spectacular days of hiking.

Rob, Thank you so much!!! I do really like that cookbook and am glad to have it, so no worries there. Give Sue my sincere thanks for sharing her yummy Broccoli Row recipes. The rest of our New Zealand trip was great, but the days with you and Simply Wild were a highlight. Carry on! Karen.
Karen Hood - Traveling with Mark Hood, Jeanne and Bill Ellermeyer - USA - November 2019

The Nelson region contains two of New Zealand’s Nine Great Walks, The Abel Tasman Track and the Heaphy Track. This three day private trip enables you to enjoy a taste of the Nelson Region’s two National Parks. Guests may stay at either Awaroa Lodge in the Park, or on our luxury catamaran Te Harinui  for the first night at Anchorage (in the middle of the Abel Tasman National Park) and Awaroa Ecolodge on the second night in the North of the Park. The Abel Tasman National Park is New Zealand’s only coastal National Park, and its golden sandy beaches and clear turquoise water make it one of the most popular. The sheltered bays are popular for cruising, sailing and sea kayaking. On land, the Abel Tasman Coast Track follows the coastline through lush native bush, over limestone cliffs and along golden sandy beaches.

Kahurangi National Park is the second largest National Park in New Zealand. It is Kahurangi’s heart of wilderness, centred on the Tasman Mountains, that symbolises the special character of this National Park. Some 570km of incredible tramping tracks span 452,000ha (1 Million acres) from Golden Bay in the north, south to Murchison and Tapawera, and to the West Coast of the South Island. Kahurangi is the home of the largest remaining population of Great Spotted Kiwi.

Within this north-west corner of the South Island lie some of our oldest rocks, most spectacular marble and karst land forms and the most intact remnants of the peneplain landscapes that featured in New Zealand around 60 million years ago. The Heaphy Track traverses from Golden Bay in the east to Karamea in the west, over craggy ranges, alpine meadows, valleys of tropical native palms, and ruggedly beautiful coastline. A plane or helicopter provides you with a bird’s eye view of this incredible landscape which includes remote sites filmed for the Lord of the Rings and Hobbit movies.

Day One – Walk from Marahau to Anchorage

After we collect you by luxury vehicle from the airport or your accommodation you’ll hike with your guide from Marahau on the Abel Tasman track along the Astrolabe Roadstead, overlooking Adele & Fisherman’s Islands. You’ll have an opportunity to drop down to the lovely beaches along the way. The trail follows the coast most of the way before climbing and turning inland, offering stunning views Northward up the coastline before dropping down to Anchorage. This 12 kilometre hike takes around 3 – 4 hours, and on arrival at Anchorage we transfer you by private water taxi to Awaroa Lodge. Here you’ll spend the next two nights. You also have the option of upgrading to spend the night aboard our luxury catamaran Te Harinui at Anchorage.

Heading for Awaroa on the water taxi, we generally stop for lunch at a private little cove on the way. Arriving early afternoon at Awaroa Lodge, you’ll have plenty of time to explore the Awaroa area with its expansive and uncrowded beach. The Lodge itself is a delightful place to stay, nestled in the National Park with access only by hiking, boat or helicopter. Your bags will accompany you on the water taxi.

This morning we travel by private water taxi, whisking you 20 minutes back down the Park to Anchorage. Here we begin the five to six hour, 24 kilometre hike on the Abel Tasman track via Torrent Bay, Bark Bay and Onetahuti Bay back to Awaroa. We stop for a picnic lunch at Bark Bay along the way. If you stay on Te Harinui, you’ll be boated ashore to begin the walk to Awaroa and the Lodge for the night.

Our helicopter arrives around 9.30am for a spectacular scenic trip through the 500,000 hectare (million acre) Kahurangi National Park, with a landing at Boulder Lake (1000 metres) before landing near the Heaphy River in the remote western side of the Park. You’ll walk for an hour to two and a half hours on the Heaphy Track with it’s spectacular subtropical forest and wild coastline. You have the option of flying back via Farewell Spit (at extra cost) and an aerial view of Abel Tasman National Park. There’s also an option to walk the full last day of the western end of the Heaphy Track to Karamea, and return to Nelson by fixed wing plane.

This experience, as with all our trips is customisable to suit you.

On a Simply Wild trip you can see, do and enjoy more at your own pace. Ït’s our experience that makes us special”.