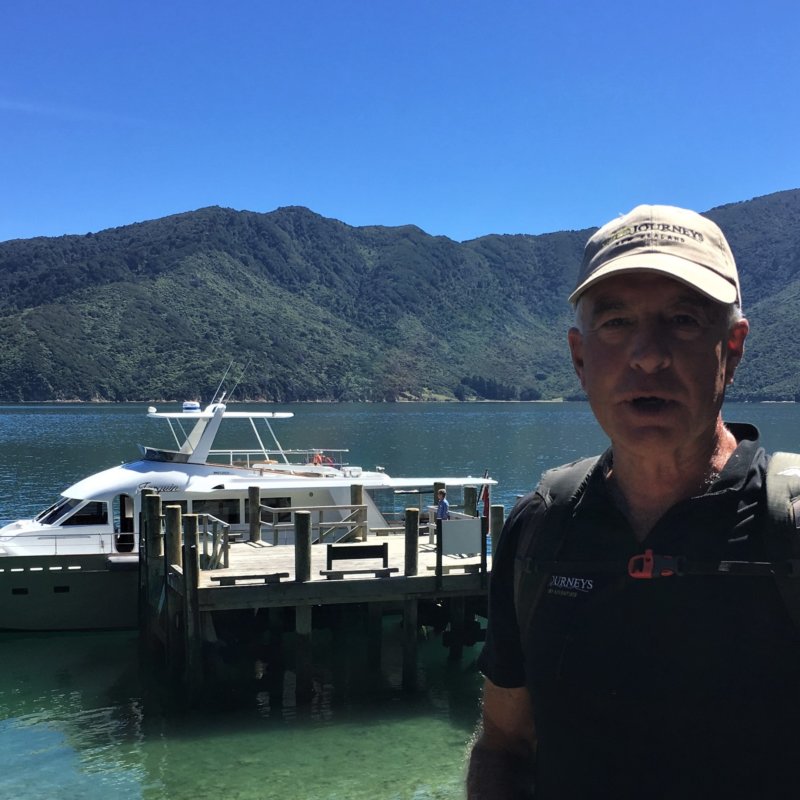 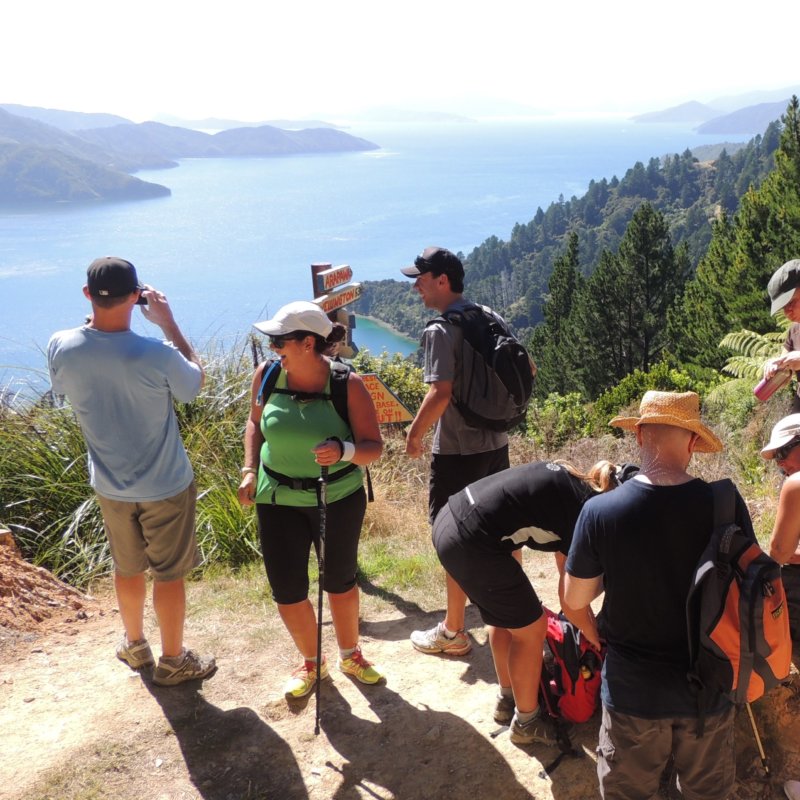 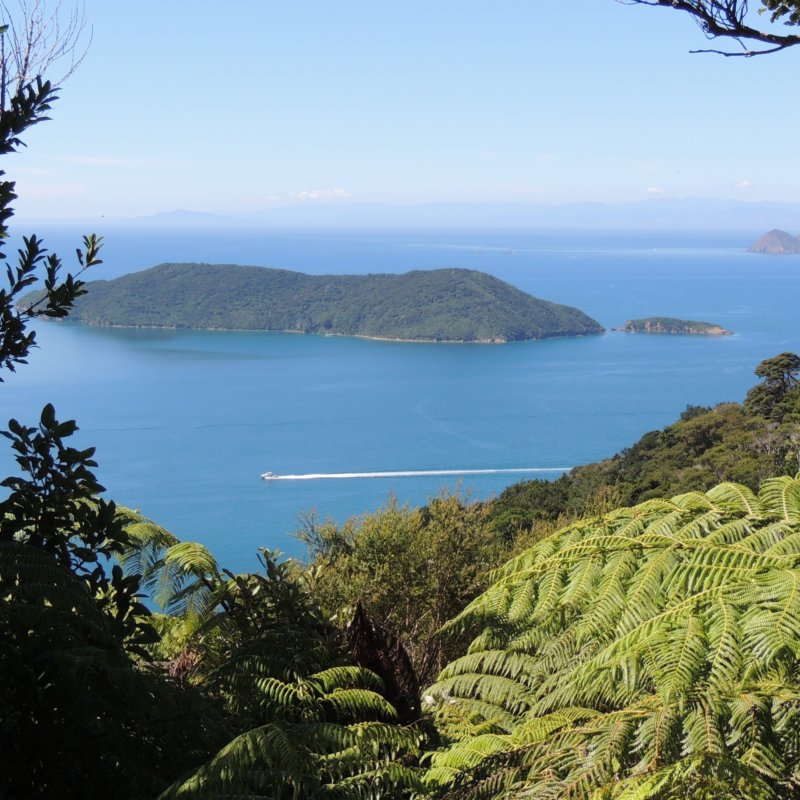 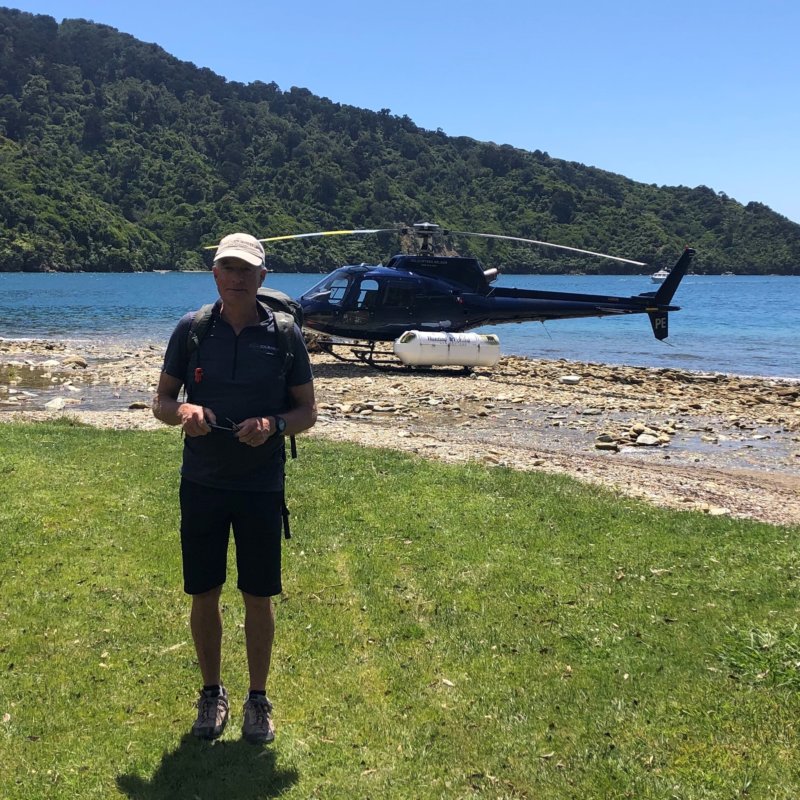 A superb private day trip from Nelson by helicopter, hiking on sections of the Queen Charlotte walkway between Ship Cove and Endeavour Inlet in the outer Marlborough Sounds.

It can also include a luxury launch or traditional sailing vessel visit to experience the beautiful predator free Motuara Island, and a flight home to Nelson via the famous Omaka aviation Museum near Blenhiem.

We had a great day with Rob hiking a bit on the Queen Charlotte and having lunch at the Bay of many Coves....he is a truly fine man and a pleasure to spend time with.
Jeff Serra - Austin, Texas - January 2020

The Marlborough Sounds are an unspoilt paradise for those who love the sea, tranquility, the natural world, freedom walking or outdoor adventure. The broad pathway of the Queen Charlotte Track lures walkers of all ages and experience along the ridgelines of the Sounds, through virgin native forests and down to blue-green coves fringed with ferns. Venture out on a cruise, charter a boat, paddle in these peaceful waterways, observe rare birds, dolphins, seals and penguins, catch a fish for dinner and relax at a hidden hideaway.

It’s all deceptively accessible from the towns, yet feels a stunning, natural world away. The Sounds remain relatively undiscovered and a retreat from the mainstream, although if you need it, civilisation is unexpectedly close at hand. For centuries the Marlborough Sounds have offered a safe harbour to travellers. First to Maori traders and war parties, then to European explorers, such as Captain James Cook and Dumont D’Urville, and now to visitors seeking new landscapes and rejuvenating experiences.

The Marlborough Sounds encompass twenty percent of New Zealand’s total coastline. This intricate maze of waterways is made up of three Sounds, the Queen Charlotte Sound, the Kenepuru Sound and the Pelorus Sound. Within the area is pristine native forest, ranging from towering 800 year old Rimu trees, to lush Punga tree ferns and beautiful native orchids leading down to picturesque shorelines. The myriad of bays, coves and inlets are perfect for exploring by sea kayak.

The Queen Charlotte Sound is the most well known of the three Sounds, and is dominated by bush-clad shorelines, deep bays and coves. The Kenepuru Sound is the smallest of the three Sounds. The Pelorus Sound has expansive waterways with some exposed areas. It is made up of beautiful sea kayaking areas (such as Tennyson Inlet and Nydia Bay), while much of the rest of the Pelorus Sound is predominantly farmland and forestry.

Occasionally we guide the whole trail with clients over several days, but generally this is a spectacular day trip by helicopter into Endeavour Inlet in outer Queen Charlotte Sound. Then either a visit to Ship Cove and a hike on lovely Motuara Island, or variations on the 5 – 6 hour hike from Ship Cove on The Queen Charlotte Walkway back to Endeavour Inlet, including a shorter 2 hour walk from Resolution Bay to Ship Cove.

In the beginning of the 20th Century, the Motuara Island was used for farming, but in 1920 it was declared a reserve. The bird sanctuary is now predator free, and visitors can walk to a lookout at the top. There are tui, bellbird, cheeky robins and fantails, as well as yellow-crowned parakeets and around 200 South Island saddleback.

It’s around 30 minutes to an hour from Endeavour to Ship Cove by boat, depending on whether you have a preference for fast private water taxi or luxury 65ft motor launch. We can also offer sailing on the traditional 70ft yacht Steadfast. This is only for a visit to Ship Cove and Motuara, as time precludes the 5 – 6 hour hike back to Endeavour. There is an option to visit Omaka Aviation Museum in Blenhiem on the way back to Nelson.

On a Simply Wild trip you can see, do and enjoy more at your own pace. “It’s our experience which makes us special”.